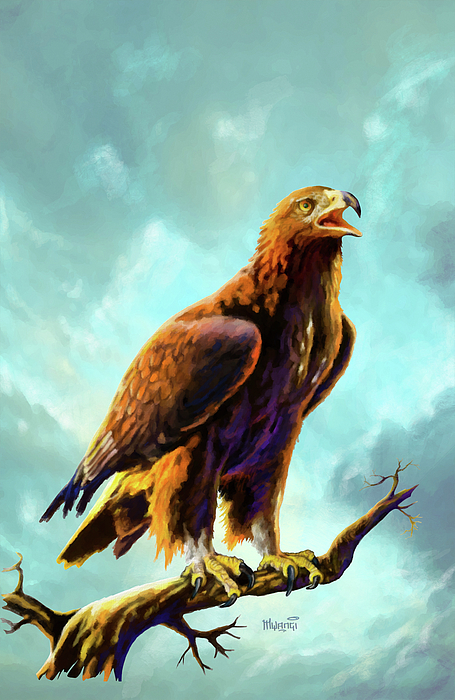 The Golden Eagle (Aquila chrysaetos)Like all eagles, it belongs to the family Accipitridae. These birds are dark brown, with lighter golden-brown... more

THIS is how I've always wanted to see a Golden Eagle portrayed on Wearable Art. I'm impressed and so delighted. You've done it again. Thank you! - Joe Mac Pherson North Hollywood, California

Thanks Mac! I appreciate very much

The feeling of focused power and noble presence is effectively conveyed in this beautiful work, Anthony!

The Golden Eagle (Aquila chrysaetos)Like all eagles, it belongs to the family Accipitridae. These birds are dark brown, with lighter golden-brown plumage on their napes. For their first several years of life, young birds have neatly defined white patches at the base of the tail and in the wings. Golden Eagles favor partially or completely open country, especially around mountains, hills, and cliffs. They use a variety of habitats ranging from arctic to desert, including tundra, shrublands, grasslands, coniferous forests, farmland, and areas along rivers and streams For centuries, this species has been one of the most highly regarded birds used in falconry, with the Eurasian subspecies having been used to hunt and kill prey such as gray wolves